Castle In A Red Storm Sci-fi/Fantasy/Mystery

"Where did you get the idea for your most recent book?"
My most recent book is actually a science fiction/fantasy/murder mystery type novelette series I'm working on, Assembly Of Planets. Now, the original idea for "Castle In A Red Storm" or volume 1 of the series, was supposed to be a one shot short story for my friend after she lost her grandmother.
The story came out of the blue when she asked me to distract her/tell her a story. I said, "Alright, I'll give it a shot."
Naturally death had me thinking about the stars and our expansive universe, so I decided to narrow that already inspirational thought process down to Jupiter.
"Once upon a time" I started, as though she were a child.
And so the story began.
I told her all about Princess Jupiter and how she isolated herself in her castle. Mind you, this was a very short story I made up on the spot. But my friend liked it, appreciated it, even.
It was a cute story. Simple. Sweet. Perhaps a little melancholy, at parts.
But that was that, and when it was over, it was gone. Done. It took years for that little story to come back to me, but when it did... It came back with a voice. A plot.
It was no longer a child's bedtime story, it was alive. It had purpose. It wanted to be heard.
And so, I tell it.
Muder, politics, stars, universe ending vortexes. That's what this beast has become, and I absolutely adore it.
I hope you do to.
Updates in the "Assembly Of Planets" series are made every Tuesday, so stay tuned if that's your cup of tea!
Posted by Unknown at 11:02 AM No comments:

Assembly Of Planets- Castle In A Red Storm Excerpt 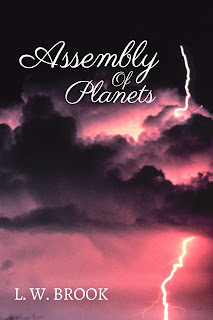 Assembly Of Planets
Castle In A Red Storm 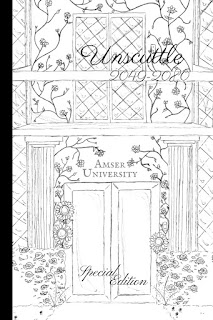 UNSCUTTLE: 2049-2080 Special Edition- Coming soon!
Get your book reviewer blog inside the pages of L. W. Brook's special edition novel by submitting a review! Just email amserstudios@gmail.com for your free reviewer copy. All reviewers receive a bookmark and a special thanks inside the printed copy of the first Amser Studios special edition novel. (Regardless of the star rating)
Not a blogger? Still submit the link(s) for your review to amserstudios@gmail.com to receive a free bookmark!

What's so special about this Special Edition?
Amser Studios novels exist within the same "Amser Universe". These special novels will help connect these stories with puzzle piece bindings, a message from the author, an Amser Universe timeline, and more!